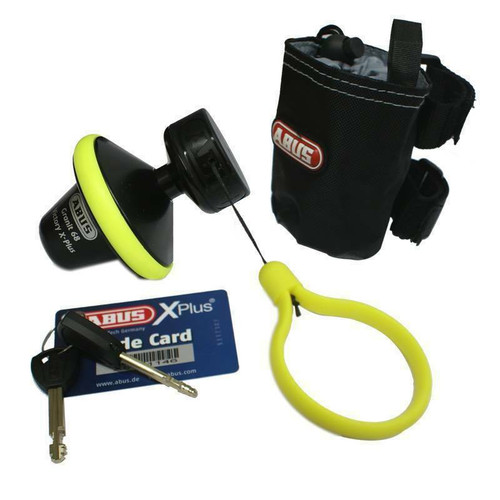 With built in disc lock reminder

You can protect your motorbike against theft thanks to the GRANIT Victory XPlus 68 brake disc lock. It all starts with the design.

Its rounded form makes it difficult for thieves to get a hold on the GRANIT Victory XPlus 68.

The 14mm locking bolt made from extra-hardened steel makes a clear statement about who your bike belongs to (also available with a half bolt head where the distance to the fork is particularly small).

An ABUS XPlus cylinder offers protection against lock-picking attacks. And because chaining it up is better than just locking it up, the GRANIT Victory XPlus 68 is also available as a chain combination.

The LED torch key and built in Memory Cable that provides a clever reminder to remove the GRANIT™ Victory XPlus 68 before starting are also included.

14 mm steel bolt
Excellent grip thanks to the rubberised ring
The bolt, lock body and supporting elements of the locking mechanism are made of specially hardened steel
The round shape hinders the use of opening tools
ABUS XPlus cylinder for exceptionally high levels of protection against manipulation attempts such as picking
Two keys are included in the scope of delivery, one of which is an LED torch key
ABUS Code Card for additional and replacement keys
A built in Memory Cable that acts as a reminder against accidentally driving away with the motorbike still locked is included

Availability: If the ADD TO CART button is visible this item is in stock and can be despatched the same day if ordered before: 2pm (Mon-Fri) Next working day delivery available for mainland UK. Please allow an extra day for Scottish Highlands & Islands

You may return items within 60 days of delivery for a full refund. We'll also pay the return shipping costs for orders over £25 or if the return is a result of our error (you received an incorrect or defective item, etc.). We would expect the return to be in the original undamaged packaging and in resalable condition.

You should expect to receive your refund within two weeks of giving your package to the return shipper, however, in many cases you will receive a refund much quicker. This time period includes the transit time for us to receive your return from the shipper, the time it takes us to process your return once we receive it, and the time it takes your bank to process our refund request.

If you need to return an item, please Contact Us with your order number and details about the product you would like to return. We will respond quickly with instructions for how to return items from your order.

ABUS GRANIT VICTORY XPLUS 68AN ALL-ROUND, SECURE OPTIONYou can protect your motorbike against theft thanks to the GRANIT Victory XPlus 68 brake disc lock. It all starts with the design.Its rounded...
Price: £84.99
Quick view Add to Cart

COMPACT DENALI SOUNDBOMB MINI PACKS A REAL PUNCH! Producing a massive 113 decibels of sound, the SoundBomb can be over twice as loud as a standard motorcycle horn!The Denali™ SoundBomb was...
Price: £23.98
Quick view Add to Cart

Smart phone / GPS holder for handlebar mounting suitable for screens up to 5 inches. Compatible with scooter,motorbike and bicycle.Universal GPS-Smartphone holder. • Safety strap and...
Price: £39.99
Quick view Out of stock

*By completing this form you are signing up to receive our emails. You can unsubscribe at any time.